On the 2nd March 2016 we realized a little experiment in UX Class, as part of the Tomáš Juhaniak´s work.

We measured the responses of the pupils in relation to different color stimuli. It is a part of the research in which we would like to clean the measurements of the pupil´s diameter from the influence of luminosity so that we have left only the changes caused by the emotional excitation or cognitive load.

We have flawlessly measured input from 20 participants. 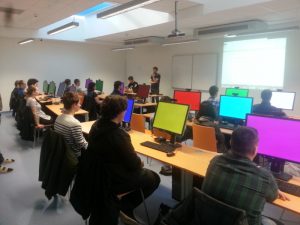