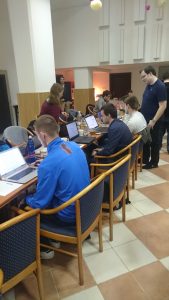 Last Ontoparty was for me first of a kind. It took place in spring of 2016 in this magic travelling place called Pútnicke miesto in Marianka. We stayed, as I found out it is several years’ tradition, in monk’s monastery. I could not imagine what we were going to do or what would be the mood of the Ontoparty, but I have to say everything was beyond my expectations.First of all we had truly interesting lecture by Ivan Srba about collective intelligence and wisdom of the crowd where we all had to guess the amount of Smarties in a jar. The result was that after removing two guesses which were the most out of range, together we were pretty close to real number, and also we could eat those Smarties J.

Second lecture was about Process Mining Software developed by two former FIIT students Risik&Otik, proud Pewe members. We could see how the process mining can be useful in optimizing business processes or software and also they showed us some of their game studio products.

After that, we played IT quiz with interesting questions from the field that is close to all of us, but even though I was quite happy to be in the team with one of the former students Risik because some of the questions were pretty hard and were  from really wide range of Informatics field.

We also had a chance to see our schoolmates’ presentation about their project competing in Imagine Cup about scoring discussion contribution. Authors declared a contest, to write to their soft the worst contribution with best rating, what many of us tried.

With quiz and Imagine cup presentation we ended the official part of Ontoparty so we could have delicious (and for Slovaks traditional) dinner schnitzels with rice and potato salad.

After dinner, Academia SeBeana was introduced and I have to say this was my favorite part, becoming a Bachelor in Beergeneering, as I learnt so much useful information about beer which I can spread to the world. I also got the best index – beer mug (Tankard?).

During this informal part of Ontozur 4 schoolmates and I were making Experiments. There were: EEG measurement experiment, Eye-tracking experiment and I was testing working-memory capacity through the use of game Pexeso. My experiment took 45-60 minutes and it was hard load to brain which is why I expected 5-6 experimenters willing to play my Pexeso. As I said before everything was beyond my expectations because at the end I had 19 experiments ended and many useful notes written down! Even though my test was not easy we had fun and participants even stand in a queue to wait for free computer so they could do my test (they actually did not had to stay in a queue they could sit and I remembered them and also brought a beer to them).

All in all I had 18 valid results, Bachelor degree from Beergeneering, learnt many interesting things and fun facts and met and was introduced to many amazing new people. And that is the reason I have to say big THANK YOU to everyone who was part of it. Thank you.